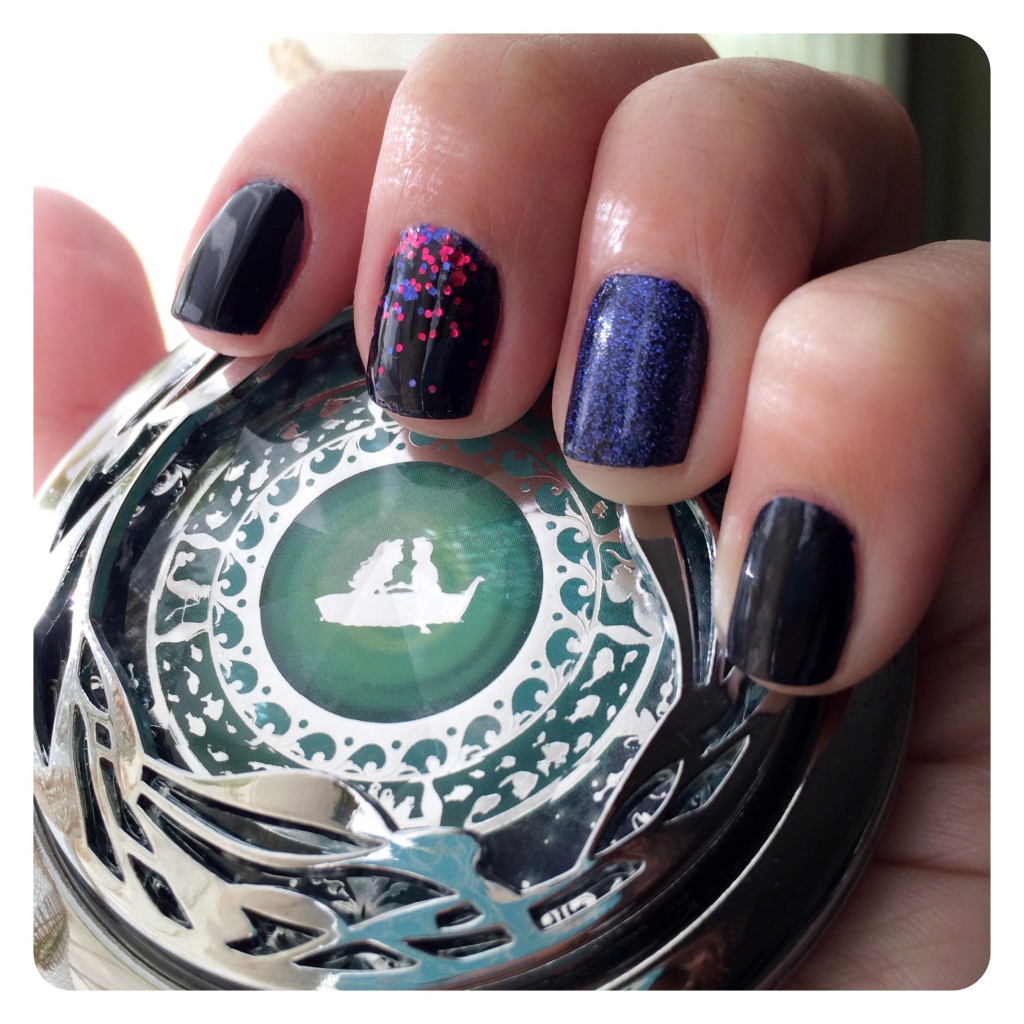 Essie ‘After School Boy Blazer’ as base colour, with China Glaze ‘Be Merry Be Bright’ on middle finger and
China Glaze ‘All Wrapped Up’ on ring finger. Orly Bonder as base coat and Essie ‘Good To Go’ as top coat.

I was just saying to myself the other day that maybe after finally swatching all the nail polishes I already had, that I would be less inclined to get my hands on new shades… but nope. I guess not! Especially when there’s good deals involved. I was able to find the Essie shade in a local Marshall’s for only $5.99CAD and Sally Beauty Supply was having a Buy 2, Get 1 free promo for China Glaze’s holiday collection. Not bad, huh?

There’s something about dark and jewel-toned shades that just match so well with this time of the year. The microglitter and glitter polishes from China Glaze’s Happy Holiglaze collection caught my eye just as much as the awesome navy blue from Essie that I was surprised to come across at Marshall’s, considering that it’s from the Fall 2013 collection.

Here is a rundown of the different shades I picked up:

1. China Glaze ‘Put a Bow On It’ – Dark magenta microglitter. Takes about 2-3 coats to get a solid, opaque coverage.

2. China Glaze ‘All Wrapped Up’ – Blue and Purple microglitter. Takes about 2-3 coats to get a solid, opaque coverage.

3. China Glaze ‘Be Merry Be Bright’ – Purple and Red […or is it magenta?] glitter on a clear base. The glitter particles are different sizes which creates a nice effect.

4. Essie ‘After School Boy Blazer’ – Blackened Navy Blue. Can amazingly pass as a one-coat wonder, but I used 2 coats anyway.

Out of these four, my favourite of the bunch would have to be the Essie polish. I was really surprised that even just one coat of this shade was opaque enough and did not seem streaky at all. I was hesitant to pick it up since I already have OPI ‘Russian Navy’ and ‘Light My Sapphire’, but this “almost black” navy blue was different enough from the other two. Whereas ‘Russian Navy’ has tiny specks of red glitter in it and ‘Light My Sapphire’ has a shimmer to it, ‘After School Boy Blazer’ is just a nice, creamy navy blue that’s simply perfect for the fall and winter months.

Now onto the China Glaze shades. The microglitters take about 3 coats to get a fully opaque coverage if you are just using it without a base colour. I was able to just use 2 coats when I used the Essie polish under it. Also, it was a tiny bit tricky to get the microglitter to cover the whole nail surface [mostly on the edges], and I found that overbrushing a coat may leave some areas on the nail without glitter. Not a big deal, but worth mentioning. I love how the microglitters sparkle, especially with a top coat over it.

As for ‘Be Merry Be Bright’, I had a slight problem with the first bottle that I bought. It seemed that it dried out, which made it apply chunky. I was able to exchange it [thanks Sally Beauty Supply!] and the second bottle had a much better consistency. If you’re going to get this colour [or any other glitter polish], double check it first if possible to make sure you don’t end up having the same issue. I’m sure it was probably due to the fact that it was the display bottle… it was just too pretty to pass up! Regardless of the little consistency glitch, I love the different sizes of glitter in this polish. I can see this working well on top of a variety of other polish shades as well. China Glaze also has some great holiday sets, so be sure to check them out!

Have you picked up any of these colours as well? What are your favourite shades to wear during this time of the year?